The Cheyenne language is spoken in southeastern Montana on the Northern Cheyenne Indian Reservation and in central Oklahoma. It is a member of the large Algonquian language family of North America which includes other languages such as Blackfoot, Arapaho, Cree, Ojibwa, Potawatomi, Kickapoo, Menomini, Fox, Massachusett, Delaware, Shawnee, Micmac, and Naskapi. 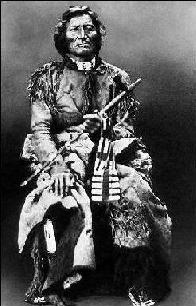 
The Cheyenne alphabet and pronunciation guide

There are only 14 letters in the official Northern Cheyenne alphabet but they can combine to create long words, composed of smaller meaning parts. Here is a prounciation guide for the Cheyenne letters. Click on a word to hear it:

The š symbol has the same sound as the two English letters "sh". The apostrophe (') stands for the glottal stop, a very frequent "sound" in Cheyenne. It is the quick stopping "sound" between the two syllables of the English exclamation, "Uh-oh!" Cheyenne "x" has the same sound as German "x". It is a voiceless velar fricative, raspier than English "h". When Cheyenne "v" comes before an "a" or "o" vowel, it often sounds like English "w". It is still the same sound unit (phoneme), however, whether it is pronounced as "v" or "w".

The Cheyenne "stop" sounds, "p", "t", and "k" are unaspirated. That is, they do not have a puff of air after them as these letters do when they begin English words, such as "pen," "toy", and "kite." Instead, they sound like the letters "p", "t", and "k" when they follow the letter "s," as in the English words "spill," "still," and "skill." Often "p", "t", and "k" are perceived and written as "b", "d", and "g". For instance, the Cheyenne word meaning "cat" can be written as boyso instead of poeso. Boyso is easier to read even though poeso is technically correct. Gi iih is easier to read than ke'eehe (meaning "grandma").

There are three Cheyenne vowels (a, e, o). They can be marked for high pitch (á, é, ó), mid pitch (ā, ē, ō) or be whispered (voiceless) (ȧ, ė, ȯ). Notice that the whispered vowels have a dot over them. The last vowel of each Cheyenne word is whispered if that word is pronounced by itself.

Here are examples of Cheyenne vowels with each of the marks on them:

Two syllables can be combined to sound like a single syllable. This occurs when there is a consonant followed by a vowel with a dot over it followed by "h" followed by another vowel then anything else before the end of a word. This single syllable is called a complex syllable. It is very difficult to learn to read and write. It is also difficult to print on signs or in obituaries or other newspaper articles. Sometimes it might be better to write a complex syllable as a single syllable instead of two syllables. For instance, the Cheyenne word meaning "Cheyenne persons" is spelled as Tsetsėhestȧhese in the official Northern Cheyenne alphabet. That is almost impossible for someone to read correctly unless they have studied Cheyenne spelling for a long time. A traditional spelling as Tsitsistas is easier to read and pronounce correctly.

Cheyenne words are made up of smaller meaning parts

Here is a long Cheyenne word:

Náohkėsáa'oné'seómepėhévetsėhésto'anéhe, meaning 'I truly do not pronounce Cheyenne well.' This word has the following  blocks (linguists call them morphemes):


It helps to spell Cheyenne by blocks.

This is just a brief introduction to Cheyenne. If you would like to learn more, visit other Cheyenne pages at this site, or read the Cheyenne reference grammar.

2020, many elders whose first language was Cheyenne died from the COVID virus.

January 21, 2007, a new Cheyenne translation of parts of the Bible dedicated in Lame Deer, Montana.

June 1998, the Northern Cheyenne Tribe held its first annual Language Immersion Camp. Participants were to speak only Cheyenne within the circle of the tepee camp. This is part of an effort to keep the language alive among the children.

On April 21, 1997, the Tribal Council of the Northern Cheyenne Tribe passed an ordinance which declares Cheyenne as the official language of the tribe.

Visit these pages for more information:

Don't race in a crazy way, try to stop your mounts, try to come in last in terms of craziness!

(This proverb was frequently quoted by the late Cheyenne historian, John Stands In Timber.

Its essential meaning is "Don't live a hurried life!")